The Defenders have moved their headquarters (unofficially, the previous HQ was Dr. Strange's residence) to the Long Island riding academy owned by Kyle Richmond (aka. Nighthawk). The team watches on in amusement as Nighthawk attempts to ride the Valkyrie's horse, Aragorn. The winged stallion bucks wildly in mid air trying to throw his mount. Valkyrie calls out to Nighthawk (a smile in her voice) to stay with her horse and prove his skills as a horseman! But, hawk-cloaked Defender or not, there's no horseman who can ride a bronco that bucks fifty feet into the air...not when that winged bronco does not want to be ridden. Nighthawk is thrown from Aragorn but with startling agility, the plummeting Defender rights himself by activating the jet pack concealed beneath his cape and makes a perfect two-point landing with the confines of the dusty coral. Despite his defeat, the group applauds Nighthawk's efforts as he returns the horse to the Valkyrie.

Shortly, inside the sprawling ranch house, the team's frivolous mood abruptly changes as Valkyrie announces that she must leave the Defenders to learn the truth about her past. Grimly, Val strides into the next room and for the next few minutes all that can be heard through the closed door is the sound of tuneless humming, then at last the door opens and the male members of the team are astonished to see the Valkyrie in fashionable, everyday clothes. Nighthawk is blown away, but he questions the presence of the sword which still hangs at her waist. The Valkyrie agrees that it is somewhat unconventional to wear her sword Dragonfang but she relates that she feels naked without it. Strange, still getting used to the female Defender in everyday attire, suggests that he may have a solution. With a wave of his hand and a minor spell of concealment, Doctor Strange weaves a spell of invisibility (and adds "a few extra twists") and the sword becomes invisible.

Goodbyes between friends are never joyous occasions, especially when the friends are as close as these four Defenders. However, Val explains that she must learn the story of the girl named Barbara whose body she now inhabits else her life will be incomplete. Turning to her teammates, she swears that once she has the answers, she will return. Strange tells her that there will always be a place for her among the Defenders. Valkyrie then kisses Doctor Strange on the cheek calling their time together, precious. Then, she kisses the Hulk, whispering that she will miss him most of all. The Hulk is mildly stunned by the affection. Finally, she turns to kiss Nighthawk on the cheek but he turns her and plants a firm kiss on her lips. He explains that THAT is how you kiss goodbye! Val then climbs into a limo which was provided by Nighthawk and is whisked away.

The Hulk watches forlornly as the limo pulls away, lost in thought about Valkyrie...about the kiss and the fact that she is now gone. Strange notices this and moves to console the green giant. However, the Hulk turns on Doctor Strange in anger exclaiming that the magician is a liar and that if he was a true friend then he would have not let Valkryie go. In a fit of rage, the Hulk pounds the ground which knocks Strange and Nighthawk off balance. Feeling he has again been betrayed by his so-called friends, the Hulk turns and bounds off before Doctor Strange can explain the reason behind Valkyrie's departure. And as the Hulk leaps off (see Marvel Team-Up #27 to see where he lands) the two remaining Defenders stride somberly back inside the range.

Inside, Nighthawk wonders aloud if he is the reason that Namor, Valkyrie and the Hulk have all departed. Strange indicates that he is over-reacting but Nighthawk feels otherwise. He laments the fact that he went through all the trouble of making a new HQ only to find the membership non-existent. He kicks the new adamantium chair he had constructed specifically for the Hulk only to regret it a moment later because of a bruised foot. Suddenly, the phone rings and Doctor Strange levitates the receiver over to Nighthawk. The financier/superhero listens intently as his servant on the other end of the line, Pennysworth, explains to him that there is an urgent matter to attend to. Nighthawk continues to listen then asks Strange if he would turn on the television. On the TV, a frantic reporter is recapping the events of the last few hours: Apparently, a group calling themselves The Wrecking Crew have threatened to destroy the Irving Building if they do not receive $10,000,000 before 8:00 PM and with only moments to go, the mayor has refused to pay the demand and instead, taken the utmost precautions to protect the building. Nighthawk and Strange watch the TV intently as the 8:00 PM comes...and then goes... with no explosion. With relief, the reporter announces that the threat was not carried out, but then suddenly, there is a low rumbling which begins to grow and then to everyone's surprise the Irving Building collapses and crashes to the ground. After the rumbling ceases, a loud voice echoes through the city announcing that New York has been warned...the Wrecking Crew now demands $25,000,000 by sunrise or else they will level the entire city by sunset!

Nighthawk clicks off the TV and turns his attention back to Pennysworth, who still lingers on the phone. He learns that this is in fact the second building destroyed by the Wrecking Crew and both have belonged to Richmond Enterprises (Nighthawk's company don't you know!). Pennysworth then goes on to explain that their company's last building is still under construction and that he has taken unspecified steps to ensure its safety. After hanging up the phone, Nighthawk turns to Doctor Strange and explains that he thinks someone is trying to put his company out of business. Moments later, two crimson cloaked Defenders soar high into the night sky, away from their bright new meeting house towards the dark dreariness of Manhattan.

A short time later, the pair arrive at the unfinished building owned by Richmond Enterprises. Strange is impressed with the structure as the duo lands on an incomplete level. Nighthawk comments on his recent lack of interest in his business, citing that perhaps he was preordained by some great cosmic force to play the hero instead. Lately, however even the hero role seems to be suspect. Doctor Strange brushes off Nighthawks self-recriminations and reminds him that he is as fine a Defenders as any of them. Just then it occurs to Nighthawk that Pennysworth had said he had taken steps to protect the place and yet none seems apparent. In the background a dark, shadowy figure can be seen watching the recent arrivals. As the Defenders ponder the lack of security, the shadowy figure sneaks up behind the pair, grabs them by their long red cloaks and throws them into a concrete wall. Dazed, but quickly on their feet, the duo turn to face their attacker...Luke Cage, Hero for Hire also known as Power Man!

Strange asks why Power Man is here and the Defenders are surprised to hear that he was hired by Pennysworth to protect the building. They tell Power Man that they too, are here to protect the building. However, Cage does not believe it and charges the two Defenders. Doctor Strange has no other choice then to protect himself and so he sends out a bolt of mystic energy. However, Power Man is very fast and he ducks the blast which strikes a carbon-steel girder, and buckles it with ease. Alarmed by the damage he has done, Strange calls upon the Rings of Raggadorr to repair the damaged girder. Power Man uses this moment of inattention to himself and clobbers Doctor Strange with a powerful right handed punch *POW!*. Cage takes a moment too long admiring his handiwork when suddenly, a hand falls on his shoulder, spins him around and *WHAMM!*, Nighthawk delivers a devastating blow to the jaw of Power Man.

Luke Cage shakes off the blow easily while Nighthawk holds his throbbing fist (he relates that it felt like he punched a brick wall!). Power Man uses the moment to explain to Nighthawk that as a result of a little experiment (see Hero For Hire #1) he has steel-hard skin and the power of a runaway rhino. He then rushes Nighthawk headlong. However, with agility that belies a man his size, Nighthawk leaps over the diving Power Man and then kicks him in the back with both feet sending him crashing into a support girder. Returning the favour, Nighthawk explains to Power Man that he too, once was involved in a little experiment which left him with twice the strength, skill and stamina of a normal man when ever the moon was out. Power Man regains his feet and is enraged, promising to tear Nighthawk apart. As he dives at Nighthawk a second time, the Defender again tries to explain that he and Doctor Strange are here to protect the building not destroy it. But Power Man is too irate to listen and he finds himself lifted by Nighthawk off the ground and into the concrete ceiling. Power Man, frustrated by this turn of events, grabs a section of the ceiling and brings it crashing down on the head of the Defender. Nighthawk drops Cage and the two turn to face off once more. With teeth clenched, the hero called Power Man rages towards his hawk-cloaked adversary...only to suddenly be brought up short when a force field surrounds him, enclosing him in a impenetrable bubble. Doctor Strange, recovered from his recent blow, having trapped the Hero For Hire, explains to Power Man that they are NOT the enemy and they are certainly NOT the Wrecking Crew. Cage begins to ask for evidence when suddenly, as if on cue, the entire building trembles violently, as though from a terrible blow...followed by a second more powerful blow...and then another after that!

With a tortured groan of twisted metal that is like the death-cry of a concrete giant, the skyscraper topples, carrying the three gaudily garbed figures along upon a floodtide of destruction, to be buried beneath countless tons of falling rubble on the street twenty stories below. For interminable minutes, there is no sound among the ruins, save for the faint shifting of settling dust-clouds and the squeal of some yielding girder. But, at long last, those three aforementioned figures rise from the rubble shaken but unharmed, enclosed in a hastily constructed Shield of the Seraphim. The trio pull themselves clear of the fallen concrete and metal only to be confronted by the authors of this destruction: Thunderball, Bulldozer, Piledriver and the Wrecker...collectively known as, the Wrecking Crew!

NEXT: Wrecking Crew go on a rampage! 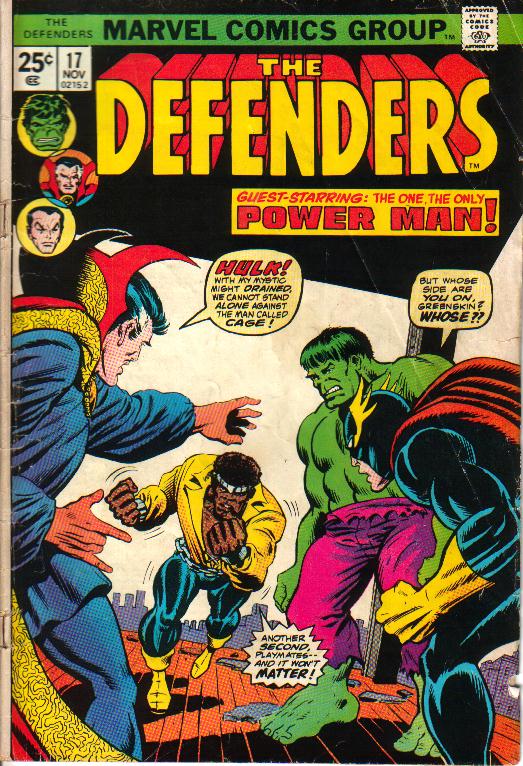