"Below Us the Battle!" (Defenders vs. Avengers Prologue)

The Defenders: No appearance (this issue is a prelude only).

(NOTE: This issue is actually about the Avengers arrival in England to search for the Black Knight (aka Dane Whitman) whom they have not heard from in sometime and are concerned (they do not know that he was turned to stone by the Enchantress' kiss and his petrified body now resides in Dr. Strange's home... remember way back in Defenders 4?). The Avengers have come to Garrett Castle, ancestral home of the Black Knight, and are surprised when they cannot enter the castle because of an invisible barrier (once again, remember Dr. Strange erected that?) While they attempt to figure the barrier out, they are attacked by surprise by Troglodytes, dwellers of the underworld! In a battle that is embarrassingly short (Avenger fans would hang their heads in shame, I am sure) the Avengers are defeated (Yes! Thor, Iron Man, Cap, Vision, Scarlet Witch, Swordsman, Black Panther and Mantis are defeated by sheer numbers of grotesque sub-humans and a subterranean-spawned gas!). Skol, King of the Caves, explains to the imprisoned Avengers, that other people in shiny clothes (namely, the Defenders) carried the Black Knight away and then they sealed the castle. As such, the Trogs could no longer steal food as they had done before (apparently, these sub-humans are actually peasants from the middle ages who were driven underground by the King's knights and who have then devolved from the isolation and inbreeding). Now, they want the barrier removed. When the Trogs learn that the Avengers do not know how to remove the barrier, the entire team is tossed into a pit in which a huge, white scorpion-like creature lives. With no more will-sapping gas to affect them, Mantis and the Avengers defeat the creature which enrages the Trogs who then extinguish all the cave's lights. Only the Black Panther can see in the dark but they quickly defeat the Trogs. In the end, the Avengers call in the British government to repair the damage done three centuries in the past by one of England's more overzealous Monarch. With the Trogs now under the care of British officials, the Avengers then turn their attention back to their original intention, finding the Black Knight. With suspicion, the team heads back to the States in search of Dr. Strange and his friends who "kidnapped" their ally ...and the classic Defenders Vs. Avengers story arc begins...)

It is midnight on All-Hallows Eve, 1972, and Loki, Thor's evil half-brother, is falling. Blinded in battle with the Thunder God, he plunges headlong over a cliff while attempting to escape (as seen in Thor #207). The frantic godling hurtles directly toward massive jagged boulders, seconds from disaster, when suddenly, in a flash of orange-red light...he is gone! Ages drift before his blank eyes, time seems to move and not move simultaneously, until he softly settles onto something solid. Loki, disoriented, demands to know who dare trifle with the Prince of Evil. Loki is shocked to learn that it was Dormammu who affected his rescue and brought him to the Dark Lord's dimension. The two boast of each other's power, Loki claiming him to be the superior, when Dormammu proposes that Loki join him in his grandest of schemes!

It seems that Dormammu still wants to rule the dimension in which Earth exists, even though he swore to Dr. Strange that he would never invade Earth's dimension again (back in Strange Tales #126-127). However, he now has a new plan. Apparently, Dormammu has discovered the existence of a device called the Evil Eye which has power enough to expand his dimension until it swallows that of the Earth. With this accomplished, the planet would be inside his own dominion and he would be able to conquer it WITHOUT breaking his word! Loki, however, points out that he had heard that the Evil Eye was destroyed by its own limitless power (this occurred in Fantastic Four #54). Dormammu replies that the Evil Eye was only shattered into its six component parts and that their powers together could reassemble it. However, since he cannot enter Earth's dimension and Loki is blind, they will need six earthlings to gather the six pieces. The six he has in mind are the friends of Dr. Strange, the Defenders! Loki likes the idea and an alliance most foul is formed!

NEXT: The battle begins in The Defenders #8 ! Then, things really heat up in Avengers #116. 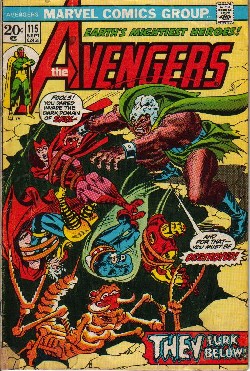