After returning to their own dimension from that of the Nameless One, the Defenders find themselves standing in a grassy field in the British Isles just outside a massive castle. The Silver Surfer is departed and filled with self-pity, his trust shattered by the events of moments ago. The Hulk, carrying the unconscious but insane Barbara, vents anger at Doctor Strange whom he believes injured her in his magical attempt to free Barbara from the clutches of the Nameless One. As the Doctor explains that it was the shock of separation which drove Barbara to madness, the Hulk reveals his true source of anger: Because he is always told what to do and he is never thanked for his deeds, he HATES Doctor Strange! This said, the Hulk, with Barbara held in his arms protectively, takes a mighty leap and clears the castle wall issuing a threat not to follow him.

Doctor Strange stands paralyzed by indecision; in doubt of his leadership skills, he defers the decision as to what action to take to Namor, the Sub-Mariner. The Atlantean quickly points out that the Hulk may inadvertently do harm to Barbara as well, so they had best pursue. The pair quietly enters the castle through a lower door but the castle appears deserted and deathly quiet. They find no signs of occupation on the main floor so they descend to the basement where they find a burning brazier. As they approach it, the flames leap up in a sudden fury and with a flash, the pair are transported to a different reality-a reality filled with sinister figures approaching!

The Defenders enter the world and immediately face a horde of armoured men from another time (it is interesting to note that Strange has now given the leadership mantle to Namor). The legions of armoured troops descend upon our heroes, urged onwards to victory by a massive and unarmoured man whose head is shaved to near baldness. Doctor Strange realizes quickly that these knights are berserkers who attack with fierce abandon and know no fear. To protect Namor from the blades of the frenzied knights, Strange prepares to supply magical armour to the Sub-Mariner. But, before he has a chance to complete the spell, he is confronted by Fragon, conjurer of Queen Casiolena. The evil wizard's powers are greater than Strange's own in this realm and quickly, the magical Defender is defeated. The Doctor is suddenly surrounded and overwhelmed by the hordes of onrushing knights. Meanwhile, Namor as battles an endless surge of berserker knights he begins to grow weaker from his lack of exposure to water. Suddenly, he is assailed by a bolt of energy issued from the magical staff of the large unarmoured warrior who is identified as the Executioner! While Namor struggles to regain his ground, a knight sneaks up behind him and WHACKS! the Sub-Mariner over the head with a mace.

The downed Defenders are thrown into a dungeon where there are re-acquainted with the un-Hulked Bruce Banner and Barbara (who lies huddled in the corner of the cell). Banner explains that they too were magically transported to this lost place by the brazier. Suddenly, the Defenders are startled by echoing voices from the cell opposite which say that their story is similar to that of our heroes. The voices identify themselves as Dane Whitman better known as the Black Knight and the Enchantress, an Asgardian sorceress. (ASIDE: Dane recounts this tale: Months ago, Odin (ruler of Asgard) banished the Enchantress and the Executioner to this land. But soon, the Executioner fell under the spell of the Queen of this realm and the pair left this dimension, deserting the Enchantress (see Avengers #83). Later, after battling with the Black Knight and the Avengers, the Enchantress was delivered to Zeus (see Avengers #100) but he was unable to hold her either. She escaped and somehow found her way into the Garrett Castle, home of the Black Knight. Here she seduced Dane and convinced him to aid her in her quest of retrieving the Executioner from the clutches of the Queen. By adding her magic to the brazier, which was guarded by the Black Knight, she created a portal. This permitted the Knight, his winged horse Aragorn and the Enchantress to travel to this misty land of the Queen where, by Odin's decree, her powers would be fully restored. When they arrived, the trio was confronted by the Queen's legion of berserker knights lead by the Executioner. In short time, the hordes of armoured men overcame the Black Knight and Queen Casiolena, having the accumulated mystical skills of all her ancestors before her, rapidly defeated the Enchantress (END OF ASIDE).

The cells that the two groups occupy are magically sealed by a spell of the Executioner. But, the Enchantess has a plan: Upon seeing Barbara in the opposite cell she explains that she can create the warrior woman Valkyrie using enchantment. The Defenders protest because Barbara is insane and she is unable to give her consent to the transformation. They also worry that because she is insane, she may become a super-maniac! Nevertheless, the Enchantress is confident in her powers as they are at their peak and she explains that the Valkyrie will be in total control while the mortal Barbara will be entirely submerged and forgotten. The Defenders voice further protests but to no avail...the Enchantress blasts Barbara through her cell window with a burst of magic. Barbara is bathed in a brilliant light and is transmuted into the Valkyrie! She stands tall and strong in dark body armour. Her blonde hair tied in double braided tails. From her shoulders unfurls a long dark cape, her wrists and upper arms are protected by silver bracelets, her breasts and mid-drift are adorned by the same silver metal. The Valkyrie, escort of the war-fallen to Valhalla, brandishes a long spear before her with sure hands.

The Enchantress urges Valkyrie to escape and using a power and strength which belies her size, Valkyrie bursts through the prison cell's door with a resounding CRASH! The woman warrior then crosses the short hall and frees the Black Knight and the Enchantress with a similar stroke. Then, with all the prisoners free, the group forges the courtyard where they are joined by the patient Aragorn. Meanwhile, the Executioner and Queen are informed by a knight of the prisoners breakout and the troops are dispatched to intercept.

The two opposing sides meet in combat with great fury. Even Banner has undergone the Hulk transformation and he and the Black Knight knock the knights around with fierce disregard. Strange and the Enchantress combine their mystical powers and soundly trounce the sorcerer Fragon. At the other side of the courtyard, Valkyrie cuts through the minions of the Queen with ease but the Sub-Mariner is swarmed by the hordes and then is blasted by the Executioner. The Queen's side-kick also handles the Hulk (whom he indicates that he has met before, see Incredible Hulk #102) by a blow with his massive axe and knocks over the Black Knight similarly with a heavy swipe. Suddenly, the Executioner's battle axe is struck from his grip by a solid blow from the lance of Valkyrie and he turns to confront her. With lightning speed and surprising power BLAM! she cuffs him with her right fist on the jaw. This is followed by a double wallop from the Hulk and Namor together CLUD! Then, the Executioner is finished off by a solid blow from the blade of the Black Knight. At the feet of the Defenders, the Executioner lies defeated.

Suddenly, on the parapet, Casiolena prepares to destroy the Defenders with a mighty bolt of enchanted destruction but Valkyrie with great stealth, climbs the parapet and leaps onto the unsuspecting Queen, gabbing her from behind. But, Valkyrie falters when she realizes that she cannot hurt another female. Luckily, the Enchantress has no such weakness and she blasts the Casiolena with a bolt of magical energy. With the Queen now fallen, the Executioner no longer is held under her spell and he is easily wooed back by the Enchantress. However, the Black Knight cries afoul; what about their love? Cruelly, the Enchantress replies that their love was false and that he was just a pawn to her...and no more. Understandably, the Black Knight is furious and he challenges the Executioner to a duel to the death. The Enchantress intervenes before blades are drawn by placing a kiss on the lips of the Knight and suddenly....he is transformed into solid stone! A monument to her love, she quips. In a flash of light, the Enchantress and the Executioner depart the realm leaving the Defenders with the statue which was the Black Knight.

Strange tries to reverse the spell but fails. Then the Valkyrie kisses him but she fails as well; her kiss does not have the power that her creator possessed. The Defenders plan on taking the rock statue back to the sanctum sanctorum of Doctor Strange where he can work on breaking the spell placed on the fallen Avenger. With a magical chant, the group is transported back to their own realm. Valkyrie rides Aragorn and quickly bends the winged horse's will to meet her own. Leaving the horse back in the realm they had departed would have spelled certain doom for the Black Knight's beast and she aims to care for it. Valkyrie proposes that she be permitted to join the Defenders team as a full member. But Strange and Namor reply that the Defenders have no team, they are NOT the Avengers. To add insult to injury, Strange explains that even if they were a team, what need would they for her, after all, the three initial Defenders are the most powerful beings on the planet, right?

Meanwhile, the Omegatron continues its countdown......

NEXT: A World Without End?? 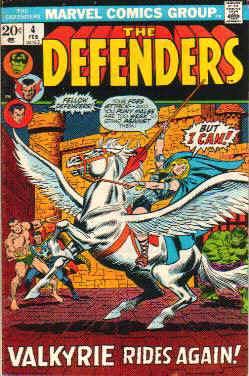