Valkyrie walks the streets of Greenwich Village in a daze. She appears confused but actually, she is deep in thought. The woman warrior contemplates her beginnings: She is aware that she is the Valkyrie created by the evil Enchantress to bedevil her enemies but she also remembers that the first time she truly lived was when she inhabited the body of Samantha Parrington (see Incredible Hulk #142). However, she ceased to exist at that time because the spell wore off. This time however, she has transformed the mind and form of the woman named Barbara and yet she remains on Earth despite the fact that the Enchantress has long since fled the Cosmos. The Valkyrie feels alone and confused because she feels she was sprung into adulthood without the experience of childhood. She has no idea how to deal with others around her on a social level. She believes that Doctor Strange feels that she should move on to other things or choose a new course of action. But, Val lives in fear that the insane Barbara might awaken at any moment and regain control of the body she now inhabits.

Lost in these deep thoughts, Valkyrie is suddenly attacked from behind by a group of green hooded men. The leader announces that they are out to avenge a "debt of blood" on Doctor Strange. Val is quick on the defense and easily handles the first attacker before using the ebony blade (which she acquired from the Black Knight) on a second and third attacker. They marvel at her physical prowess and sword play. Another green-garbed figure is about to jump her from behind when he is blasted by a bolt of mystical energy! Doctor Strange arrives in the nick of time, his hands still in the position which he used to generate the magical force.

He reports to Valkyrie that he was notified about these enemies by his Eye of Agamotto. Valkyrie, not one to ask for help from men, is indignant. Strange senses her resistance and retorts that not only was she in need of his help but she also needs his friendship. He escorts her back to his residence. Val reveals that she has a basic distrust of men and women have a basic distrust of her because of her aggressiveness. Val remarks to Strange that she is aware that Cleo (Strange's live-in lover) already wishes that she was not sharing their home. As Valkyrie walks to her room, she laments the loss of a love she had for the Black Knight, since turned to stone by the Enchantress. No one is aware of the feelings she developed for him during their most recent battle together. Doctor Strange urges her to make peace with the Hulk and the Sub-Mariner and supplies her with ruby crystals which would allow her to pinpoint their exact location.

Valkyrie mounts her winged horse Aragorn, whom she also acquired following the Black Knight's unfortunate demise, and considers what Doctor Strange has said. Finally, she resigns herself to the fact that she has no one to turn to BUT the other Defenders. The first crystal points her to the city streets below where she discovers Namor in the company of Mrs. Prentiss and his cousin, Namorita. Val quickly explains her intrusion: She needs friends and a purpose. But, Namor replies that his needs are the exact opposite in that he no longer requires nor desires human contact. Val angrily retorts that he is the most self-centered man she has yet to meet and before Namor can defend his comments, he is dematerialized before her eyes and vanishes in a cloud of smoke!

Suddenly, Val notices that the ruby she was given has changed direction. She and Namorita quickly mount her waiting white stallion and depart in search of the vanished Sub-Mariner with only the crystal as their guide. However, on their way the other ruby leads them directly to the Hulk, who notices their approach. The Hulk remembers Valkyrie but he also recalls that she wanted him to be a member of the Defenders but in his heart, he just wants to be left alone. So, he attempts to bound away but they pursue him. They fly around him, as he sails through the air, like an annoying gnat attempting to explain to him that they need his help in finding the missing Namor. Angrily, he lashes out at the mounted twosome saying he wants to be left in peace! In doing so, he knocks Val off her winged steed and she plunges towards the earth far below.

As she falls, she notices that like Namor, the Hulk vanishes too in a brilliant flash of light! Suddenly Aragorn sweeps in out of the blue and rescues the falling Valkyrie from a certain death. Having been saved, Valkyrie wonders if she actually could of died had she hit the ground, being that she was never truly even born. Val checks the crystals and finds they both point in the same direction. Namorita and Val head out to find the lost Defenders!

After untold moments of flight, the women come across an abandoned lighthouse on the coast of Maine. When BLAM!! they suddenly hit what appears to be an invisible wall. The pair lands Aragorn and then Nita, in her haste to rescue Namor, rushes into the wall a second time BLAM! Val however, approaches the wall more cautiously, ascertains its location and then with a mighty KRAKK! smashes through it with a swipe of her half--magic and half-physical blade. Inside the invisible wall, they discover a huge machine: OMEGATRON, the doomsday device. The machine has a face which speaks to them slowly and deliberately, telling them the story of how it was built by its master YANDROTH to disintegrate the Earth (see Marvel Feature #1) simply by uttering his creator's name.

The Omegatron recounts how it arranged to have the Hulk and Sub-Mariner battle here so that their tussle would generate the necessary vibrations to lend power to its circuits. However, Dr. Strange had intervened by halting time around the machine, forever freezing the moment of it's "scream" which would otherwise doom the planet. Strange then cast a magical spell of invisibility over the machine, giving it an outward appearance of the light house so no one would ever accidentally restart the doomsday machine's count-down. However, it was accidentally re-started when Dr. Strange attempted time stoppage again and his control over the Omegatron was weakened by the extreme exertion (see Defenders #1). Now, the clock counts down with the equivalent of 6 minutes left to the end!

Valkyrie attempts to destroy the machine with her blade but suddenly, Omegatron conjures up 5 Hulks and 5 Sub-Mariners! The Valkyrie takes them on one at a time but realizes she is fighting a losing battle because she knows that 4 of them are not real...she summons Aragorn. The winged horse storms in and attacks the real Hulk which causes the false Hulks to disappear. The horse then differentiates the real Sub-Mariner in a similar manner. Val realizes that the two Defenders are under the control of Omegatron because as she engages them in battle they prove to be slow and easy to fight. Val uses a piece of machinery to smash the mind-controlled twosome with a resounding blow. The two heroes then regain control of their minds. However, the force of this blow provided the necessary vibration for Omegatron to transform.

From out of the machinery, morphing metal and electronics, Omegatron takes on a human form. However, he is gigantic, a mighty silver metalled humanoid machine. The massive metal being then stands, arising from the metal scraps which was once the doomsday machine, the building around them crumbled in ruin. The Defenders know that if the machine speaks the name of its creator, then the world will end! The Sub-Mariner quickly gathers his wits and dives into the water, he swims at a super-speed and creates a mammoth tidal wave which staggers metal giant. Before the Omegatron regains its balance, the Hulk pounds the earth with a mighty blow which creates a huge shock wave that topples the living computer. But, as the machine is falling it begins to say "YANDR....!!" but before it can finish the name, Valkyrie flies in on her steed and using her magical blade, slices off its head!

With the machine now defunct lying fallen in the ocean, Namor makes a speech about the vanity of Omegatron's creator Yandroth. That is, his ego created a machine which possessed his human physical and mental characteristics. But, Val is quick to point out that Omegatron had magical power as well as physical strength. Which was why her sword was the only thing that could truly defeat the machine. Her sword only has physical form through magic (see Marvel Super-Heroes #17) and was therefore effective where magic alone (ie. Dr. Strange) and physical strength alone (ie. Hulk and Sub-Mariner) could not defeat the creation.

Valkyrie relates that she is valuable to the Defenders (the Hulk goes "BAH! No more talk of the group!" and leaps away in one huge bound). But Namor mulls things over and says that he thinks she has demonstrated both bravery and an highly analytical mind. The remaining members of the Defenders head back to New York to discuss new beginnings.....

NEXT: The Dreams of Death, guest starring The Silver Surfer! 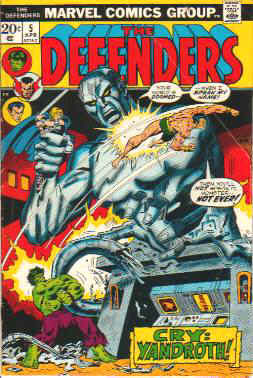