"I Slay By The Stars"

Nemesis/Villain Appearances: Necrodamus, The Nameless One, Devil of the Dark

Out of nowhere Namor, the Sub-Mariner, falls unconscious from the sky over New Jersey to be found by the Hulk. Recognizing him from their last meeting (see: Marvel Feature #3) the Hulk realizes Namor needs help and the only one he can think of is Dr. Strange so he sets off to New York City in search of him. Finding Strange in Greenwich Village, the Hulk mutters that he has found the "Fish-Man" and he needs help. Strange understands whom he is referring to so he quickly makes them both invisible and transports themselves via levitation to the site of the fallen hero.

Strange discovers that Namor is surrounded by an impenetrable mystical barrier. Suddenly, a short humanoid being appears dressed in robes: Necrodamus. (ASIDE: He recounts a tale of how he was granted power by The Undying Ones, beings from another dimension, whom Strange had previously met and conquered by subjecting the Night Fiends, sent by The Undying Ones, to sunlight (see: Doctor Strange #183). This eventually lead to a battle between Strange and the ruler of The Undying Ones aptly called The Nameless One. With the help of the Sub-Mariner, Strange fought a hopeless battle during which he sacrificed himself to save Namor from being trapped in the Undying Ones' dimension (see: Sub-Mariner #22). However, other disciples of The Nameless One brought the Hulk and an unnamed traitor to the dimension of the NightCrawler (see: Incredible Hulk #126) where the ensuing combat destroyed that universe causing the traitor and The Nameless One to return to their own dimension and the Hulk and Namor back to Earth. END OF ASIDE)

Standing over Namor, Necrodamus relates that he plans on sacrificing the Sub-Mariner and that he orchestrated this gathering of heroes, in the name of The Nameless One, to avenge these defeats and gain favour with his master. Before departing magically, he indicates that he will return in one hour's time, when the stars will align themselves correctly. In his absence, the Hulk tries to smash the barrier surrounding Namor but to no avail. Doctor Strange attempts to break the barrier through magic but he also fails (unknowingly, because he used all his magical effort, a previous spell he cast weeks earlier to stop the countdown of the world-destroying Omegatron (see: Marvel Feature #1) is weakened and the countdown is resumed at a slow but steady pace).

Exhausted from the effort, Strange rests in deep meditation while the Hulk continues to pummel the magical force field for near an hour but again to no effect. Strange awakes with the idea that he can protect Namor by covering him in a second barrier but when he weaves the spell, Namor suddenly sinks into the ground and disappears. Realizing that Necrodamus has whisked the Sub-Mariner away to caverns below, the Hulk and Strange set out to look for an entrance. Upon finding the cavern's opening the pair are assailed by a huge beast who calls himself Demon of the Dark. The Hulk, who is already angered at taking orders from Doctor Strange, uses the demon as an excuse to vent and quickly dispatches the beast.

Once in the vaulted cavern, they discover the Sub-Mariner lying upon a sacrificial stone slab with Necrodamus, dagger in hand, above him. The smoke and shadows in the cavern coalesce into an insubstantial shape of the dreaded Nameless One, who watches on in anticipation. Suddenly, Necrodamus notices the heroes and obliges the Hulk's request to become larger to make the fight more fair. Now larger than the Hulk and armed with a magical blade, Necrodamus engages in battle and stabs the Hulk in the chest. Meanwhile, the stars draw nearer to their mystical alignment. While the titans tussle, Strange uses the opportunity to discover that the barrier surrounding the unconscious Namor is permeable to air and so magically, he introduces water vapour into the casing which condenses to liquid. Once covered in water, Namor awakes and quickly grasps the situation. Using all his might, he bursts from the barrier which was weaker from the inside. He descends upon Necrodamus just as the Hulk is stabbed a second time.

As Namor and the evil magician wrestle with the dagger perilously close to Namor's neck, the stars draw even nearer to alignment. The Hulk, injured from his wounds lies fallen and reverts back to his human form, Bruce Banner. With seven seconds before star alignment and the blade two inches from Namor's throat, Doctor Strange pounces on the knife wielding arm of the vile Necrodamus. Whereas his magic was useless to break the magical barrier which previously trapped Namor, Strange's physical strength helped slow the advance of the descending blade. Still, he was not strong enough to stop the dagger and just as the stars came into proper position and the blade was a hair from the Sub-Mariner's neck, Bruce Banner jumps into the fray stopping the sacrifice and the moment of alignment passes. Necrodamus roars with rage and frustration as The Nameless One looks on in displeasure. The moment lost, Necrodamus reverts back to his smaller self and before vanishing with his master, promises that when the stars call for blood again he will return to exact vengeance for The Nameless One!

The battle won, Doctor Strange assesses the injuries of Bruce Banner but finds none. He decides that the blade, being of magical creation, could only kill when the stars were in position. Strange then turns his attention to the recovering Sub-Mariner and inquires as to just how he came under the influence of Necrodamus in the first place. Both Doctor Strange and the Hulk are shocked to hear that it was the Silver Surfer who was responsible for Namor's earth bound plunge...and so, the loosely associated team sets out in search of The Silver Surfer!

NEXT: The Search for the Silver Surfer 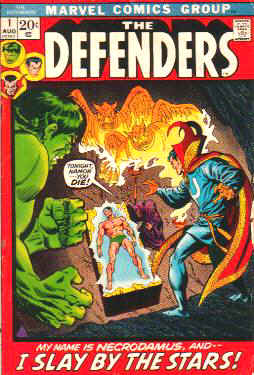