"The Search for the Silver Surfer"

Two months have passed since Strange and the Hulk rescued Namor from the clutches of Necrodamus. During this time, with the Hulk departed, Namor and Dr. Strange have scoured the Earth in search of the Silver Surfer who they believe aided the vile Necrodamus in his attempt to slay the Sub-Mariner. On this day, Namor is searching the ice-laden waters of the south polar seas when he is joined by the astral-projection of Dr. Strange who reports that he has no news yet as to the whereabouts of the Silver Surfer. As Namor laments the fact that he thinks the Surfer has left the planet itself, suddenly the Surfer appears. Swooping down, the Silver Surfer plucks Namor from the frigid waters and with exuberance relates how content he is with the world and that he wishes to join with Namor again (see Sub-Mariner #34 and #35) to aid the planet Earth.

The Sub-Mariner is still fuming at the silver hero for his role in the recent conflict with Necrodamus and lays a wallop of a punch on the Surfer. Strange meanwhile, watches on in astral form, unable to participate. The Silver Surfer is totally surprised by Namor's actions and cannot understand his behaviour. Indignant at this treatment, the Surfer abruptly leaves the Sub-Mariner promising that he will never again offer help to humans, and plans on spending the remainder of his days in his private valley. Strange watches helplessly as the Surfer departs but he explains to Namor that he has an idea where this "private valley" might be and so he beckons the Sub-Mariner to join him at his sanctum sanctorum in Greenwich N.Y. to draw up plans.

Much later, in the residence of Dr. Strange, Namor ascends the staircase to the repository where the Master of the Mystic Arts holds his manuscripts. Here, Strange reviews a diary written by a friend of his, Kenneth Ward (see Doctor Strange #183). In this book, Strange discovers that indeed, the Undying Ones were once associated with a hidden Himalayan valley. The diary reveals the valley's location and they believe this might be the same valley to which the Surfer earlier referred. Before they depart, Strange explains that it might be better to summon the Hulk so that he may pay retribution to Necrodamus who stabbed him twice in their last battle.

Moments later, they discover the Hulk and convince him to join them. Wearing Strange's cloak of levitation, the Hulk permits Strange to sit on his shoulders and they fly off towards their destination...the mountains of Asia. Meanwhile, the doomsday device Omegatron, which was accidentally set off last issue continues to tick at a rate of 1 second per month! Finally, the Defenders arrive in the Himalaya's where they discover a small village whose inhabitants run in fear of them. Obviously, they have been warned by the Undying Ones never to speak to the Defenders. More evidence that they are in the right place. Dr. Strange uses his magic to create the illusion that the trio are merely explorers and casts a spell of forgetfulness over the village.

Using several villagers as guides, they set off to search the area. They climbed the mountains and scoured the area to no avail and when it grew dark, they set up camp and slept by firelight. The next morning they awake to find the guides missing and mysterious sets of bare footprints leading away from the camp. The tracks lead suspiciously to a previously unseen valley. They discover a dead guide whose hand points to the valley's entrance. As they enter the valley, they notice it becomes warmer and suddenly, they are confronted by what the Hulk calls "Monkey-Men", strange hairy beasts who the trio believe are responsible for the guide's death. They speak in a strange tongue and the Hulk wasting no time in argument, picks up one of the Monkey-Men and hurls it at the others.

Suddenly, the Silver Surfer arrives and intervenes in anger. He harshly explains that the creatures are harmless and are his friends. Namor, his own anger still fresh from their last meeting, ignores the beasts and launches an attack on the Surfer calling him a villain. The Silver Surfer still does not understand why the Sub-Mariner is so angry with him. So, Doctor Strange intervenes and asks Namor to explain himself. The Sub-Mariner then recounts his story: The Sub-Mariner and his cousin Namorita were building a new south pole home when he sent her to retrieve more supplies being that the area they were in was short of building material. When she had left, he suddenly feel the workings of some enchantment and he blacked out. He awoke at one point to discover Necrodamus and the Silver Surfer conversing in low tones and the last thing he remembered was being tossed from the Surfer's board to the earth below.

Hearing this story, the Silver Surfer vehemently denied everything saying that he has not seen Namor in months. The Silver Surfer then recounts his own tale: After Galactus left Earth (see Fantastic Four #123) the Silver Surfer sought to cleanse himself of the stain from the psychic battle so he went off on his own and discovered this near-human tribe and decided he could finally do something constructive. He aided the tribe by teaching them the rudiments of civilization and once he felt he had steered them along the right path he returned to the outside world. However, Dr. Strange interrupts and points out to the Silver Surfer that these same Monkey-Men were responsible for killing one of their guides. Just as the Surfer was about to deny this claim, the creatures undergo a sudden transformation and become human! The leader of these men explains that they are "Calizuma and his Warrior Wizards" and that they did, indeed, kill the guide.

As the battle ensues, Calizuma explains that they infiltrated this valley and exerted subtle mind control on the Silver Surfer, making him do their bidding. All the while, Namor and the Hulk battle the minions while Strange went head-to-head with Calizuma. While the rest of the Defenders easily handle the Warrior Wizards, Dr. Strange is struggling with the more powerful Calizuma. It is only through the combined forces of the FOUR Defenders in one big WHACK! that he falls to defeat. The Doctor then places a spell of atonement over the defeated group hoping that they forget their evil ways. Meanwhile, the Surfer laments that Earth is such a warring planet and he expresses his desire that he wishes he may one day be able to return home. Enigmatically, Dr. Strange hints that he may be able to grant the Silver Surfer his wish! .......

Next: Four Against the Gods! 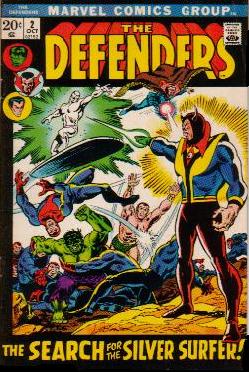