"Four Against The Gods"

Nemesis/ Villain Appearances: The Nameless One

(ASIDE: The events to unfold in this story are foreshadowed by the T.S. Eliot poem "Four Quartets" which is outlined against our heroes falling into a dark maelstrom on the first page. END OF ASIDE)

The story continues from last issue...Dr. Strange explains that there is a way for the Silver Surfer to return home to his beloved planet of Zenn-La. Apparently, Galactus created a barrier surrounding the Earth which prevents the Silver Surfer from leaving. But, Strange points out that the barrier only exists in THIS dimension. He proposes that they travel to another dimension where the barrier does not exist and then return to their own dimension, but at a point OUTSIDE the barrier. Thereby, effectively circumventing the prison created by Galactus.

The Surfer agrees to this after consideration, as does Namor who finds the idea of dimensional travel intriguing. The Hulk on the other hand, rejects the proposal citing his frustration at being ordered around by Strange. However, the Silver Surfer pleads with the emerald giant explaining that a journey such as this should be done with friends. The Hulk softens his stance and agrees to the plan because the silver hero called him a friend. Namor meanwhile, quickly refreshes himself by plunging into nearby water and uses the opportunity to make a political statement about human pollution of the Earth's water supply.

Then, when all are ready, Strange opens an inter-dimensional portal. For countless moments the Doctor guides them through the dimensional channel when suddenly he realizes that he has accidentally transported the Defenders to the realm of the Nameless One! Before the team has time to find the exit from this universe, Doctor Strange discovers Barbara (she had sacrificed herself in an effort to free Strange from this plane of existence: see Incredible Hulk #126) who is trapped in an ethereal force field. When Barbara sees the Defenders approaching, she pleads desperately for them to help her get free of her bonds. Strange and the Surfer use their combined forces to free Barbara from her prison. As Strange comforts her, he ponders their fortunate cosmic accident that delivered them to her. Fearing a confrontation with the Nameless One, the group prepares to depart using the Surfer's spatial sense of direction as their guide.

Suddenly, a gaping hole opens in space and a emits a powerful maelstrom which begins to suck our heroes towards it. As the Defenders are pulled towards the vacuum, the Silver Surfer attempts to summon his board. When it does not respond, Namor "swims" against the force to capture the Surfer's ride. Meanwhile, as the Hulk free-falls towards the hole he manages to grab the sides and straddle the gap thereby blocking the hole-in-space by his body. Doctor Strange, Barbara and the Silver Surfer manage to grab hold of the Hulk as he covers the vacuum. Namor meantime, has secured the Surfer's board but he has no control of it. He smashes into the group of heroes with the board but the Hulk manages to hold fast! The Surfer, now united with his board, drags the hapless group from the suction force of the hole to safety.

Namor, who is exhausted from the ordeal of retrieving the Surfer's board, is revived when Strange douses him with water he manifests from nowhere. As Doctor Strange thanks Namor for his efforts, the Hulk inwardly fumes that no one has thanked HIM for his accomplishment. They prepare to leave the area to return to their original mission of getting the Surfer home. Suddenly, the group notices more poles of ethereal force, each which imprisons the woman each Defender loves: The Hulk's Jarella, the Surfer's Shalla Bal, Doctor Strange's Cleo and Namor's Dorma. While the other Defenders question their respective loved ones, the Sub-Mariner realizes that this must be a trick since Dorma is long since dead.

This breaks the spell on the Defenders and as they turn around...there stands the Nameless One (the living embodiment of horror), on a massive piece of asteroid. A huge four winged, two headed beast with red eyes, long sharp claws and vicious fangs. But, things are different from the last confrontation because now the ugly creature has a third head....that of Barbara! As the heroes watch the images of their women fade like smoke, Barbara explains that her loneliness was so great that she became her captor's mate out of need for companionship.

As she holds the Defenders attention, the Nameless One launches a huge burning rock at our heroes. The Surfer is quick to respond by blowing the flaming boulder to fragments by attacking with hand spawned energy blasts. However, the silver hero fails to notice the swinging mighty fist of the ugly beast and the Surfer is walloped with a resounding thump! Namor moves in quickly with super speed and lays a devastating double fisted punch to one head of the vile creature. However, he too is not fast enough to avoid the creature's massive hand and he is snatched in flight and thrust into the mouth of the other head! While Strange attends to the Surfer's injuries, the Hulk becomes enraged and launches his own attack. Suddenly, the Sub-Mariner bursts forth from the gaping maw of the Nameless One just as the Hulk topples the huge beast by tipping the asteroid on which it resides.

Barbara watches on in regret of her betrayal as she sees the tide of the battle turning. As the Hulk and Namor repeatedly pound punches into the ancient enemy, Strange and Surfer use their combined forces to trap the foot of the Nameless One into the very same ethereal prison which ensnared Barbara. Then, Doctor Strange uses his magical powers to separate Barbara from the Nameless One. However, in his success, he notices that despite freeing her, Barbara had gone quite mad. With the two-headed beast struggling to free itself and Barbara in tow, the team heads out away from the Monster-God. Strange ponders aloud that maybe the reason for Barbara's madness was the fact that she had grown happy with the union.

Hours later, their inter-dimensional travel ends when the Silver Surfer announces that he detects that they are beyond the barrier erected by Galactus. With a few magic words Strange returns the group to their own plane of existence. However, instead of being outside the barrier in the depths of space as expected, our team stands in the lush greenery of a grassy field next to a huge castle. The Surfer moans with betrayed grief as Strange understands the failure. He explains that even with the specialized spatial abilities of the Silver Surfer, the physical laws of one universe cannot be applied to another; points in one dimension do not directly correspond to points in another plane. The Surfer, wallowing in self-pity, bemoans that he is trapped forever on this miserable Earth. He mounts his board and vows never again to place his shattered trust in men. He flies off alone. As the Defenders watch the silver hero depart, the Doctor inwardly questions his ability to lead the Defenders owing to the failure of this mission. While the Hulk and Sub-Mariner stand-by with troubled looks, Barbara, deep in her madness, wails insanely....

NEXT: The New Defender and the Old Avenger! 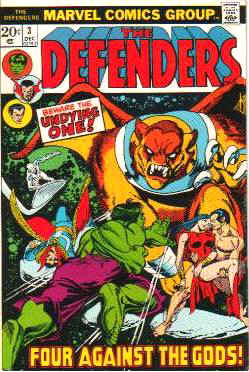