"The Dreams Of Death"

The Silver Surfer returns after months away brooding over his misfortunes of late. Today, however he feels ready to rejoin the world. He is in search of the Sub-Mariner and Doctor Strange because he wants to apologize to them for his irrational behaviour during the last time they teamed together. As the Surfer approaches the street where Strange resides, he comes across a gigantic multi-coloured cube which cover more than a city block. A police officer (who is attempting to control the panic in the street) notices the Surfer and informs him that the cube just suddenly appeared and was centered over the home of Stephen Strange. The Silver Surfer gets the growing crowds to stand aside and blasts the cube with a burst of cosmic power. The effort only causes a swirling of colour on the cube's walls. The Surfer realizes it will need a more direct approach and gets the police to evacuate the area. He then flies at full speed high into the atmosphere before turning and hurtling himself downwards towards the mysterious cube. He smashes into the massive box head-on and breaks through, crashing into a building inside the barrier. The silver hero frees himself from the rubble of the demolished building and finds that Dr. Strange's home is under siege by a magician named Cyrus Black (who call's himself the Devil Incarnate!) and a group of green hooded henchmen.

Inside Dr. Strange's mansion, the magician, Valkyrie and Namor watch on in anticipation. Strange notes that he had met Black in his early days as a sorcerer but always thought him to be only a minor magician. Cyrus Black hears this comment and laughs explaining that since their first meeting he has spent years studying and improving his art to better himself as a sorcerer. To prove his point, Black creates magical ladders to allow his henchmen to scale the walls of Dr. Strange's home. However, Valkyrie uses her magical ebony blade (which is both physical and magical) to slice through the ladders. Still, the green garbed men storm the house through a skylight and the front door. Namor takes them on hand-to-hand and reminds Val that the Defenders are NOT a team! The evil magician and several of his servants are about to enter Strange's home when they are intercepted by the Surfer who sends the group sprawling into the street. Dr. Strange invites the Silver Surfer into his home to aid in the fight and then seals the front door with strong magic.

Inside, the Surfer and Sub-Mariner defeat the remaining interlopers with ease. Meanwhile, outside Cyrus Black discovers that his well conceived plans are quickly unraveling. The Silver Surfer reflects that the evil sorcerer's plan was formed more by ego than reason. This enrages the "Devil Incarnate" who then projects two bolts of bedevilment from his fists in an effort to turn the Defenders into slime. The blasts however, go astray and strike the statue of the Black Knight (remember how he was turned to stone in Defenders #4?). In defense, Strange weaves a spell of enchantment which washes over Cyrus Black and drains him of all his remaining mystical energy. Returning his attention to the Black Knight statue which began shaking from the energy blasts, Strange "leeches" the harmful power from the stone figure which was threatening to shatter. The Sub-Mariner is the first to notice that during the confusion, Black and his dark minions made good an escape and the enclosure had also vanished!

Doctor Strange contemplates how he had underestimated Black's powers and noted that henceforth, Cyrus Black was to be considered dangerous! Strange then thanks the heroes for their aid in defeating the vile villains and introduces the Silver Surfer to Valkyrie. The Surfer turns to Strange and Namor and apologizes for his previous actions at their last meeting when he left them in frustration. The Surfer and Valkyrie discover that they have similarities in that they are both in forms very new and different from their previous selves. They seem to hit it off immediately. The Silver Surfer relates that he was planning on flying across the world to observe its varied peoples and he invites Val who eagerly agrees to the prospect. The Sub-Mariner asks if he may attend as well to aid in the education of Valkyrie about the world and soon, the trio departs for unknown adventure!

Meanwhile, back at his home, Cyrus Black is in the midst of a tantrum at being defeated so handily by Doctor Strange and the Defenders. He laments his loss but decides he requires rest as a result of the ordeal. He lights his brazier filled with a new Jamaican incense which he hopes will protect him during his slumber and drift off to a dream-filled sleep. In his dreams he thinks that he has in fact entered another realm and blames the new incense. Here, his pet rat Nebuchadnezzar is a giant beast and it launches an attack on him. The rat pins him and just before it bites his throat he realizes this MUST be a dream and screams himself awake...only to find that huge rat is REAL and is in his bedroom! He screams again and the rat suddenly shrinks to normal size. Cyrus Black slowly comes to the realization that his nightmares have the ability to become reality. With this in mind, he flips through a book of mythological creatures and formulates a plan to exact vengeance on Dr. Strange.

Two days later, the three weary heroes return to New York from their trip abroad. The Sub-Mariner is mildly brooding, quite possibly because of Val's new found kinship with the Silver Surfer. No sooner does the trio enter the home of Dr. Strange when they find him confronted by a huge snarling beast which suddenly appeared in the room out of thin air! The huge bruise-coloured beast, which appears to be a cross between a bull, an ape and a bear, slashes a sharply clawed hand at the Doctor, sending him flying. However, the Surfer acts quickly and blasts the strange intruder with a bolt of power cosmic directly into its gaping maw and, as inexplicably as it appeared, it disappears in a puff of brown and orange smoke. Then, before the group can regain their bearings, a second beast appears. This time a three-headed fire breathing snake! Valkyrie bravely steps up to face the formidable beast and with a swipe of her blade decapitates two of the heads. The creature grabs Valkyrie and its only remaining head speaks to her in syllibant tones. It exclaims that it is the Serpent of Rham and to defeat it, ALL its heads must be severed. The Sub-Mariner hears this explanation and quickly pounds the last remaining head. And, as it appeared, it disappears, in a cloud of smoke. Somewhere, Cyrus Black lies in sleep with a bemused smile on his face.

Doctor Strange, rubbing his sore shoulder from the attack, notes that previously, he always thought that the Serpent of Rham was mythological. Now, he wonders when the next fantastic beast will attack. Suddenly, the room is filled with light and smoke and Cyrus Black himself arrives. This time he is huge and muscle-bound, obviously a dream creation, a manifestation of his over-inflated ego. The Defenders attack simultaneously; the Silver Surfer and Doctor Strange blasting energy at the fearsome form. But, the attack is without effect as the dream created Cyrus Black stands fast and then counters with energy of his own. He sends the Surfer and the Sorcerer flying. Quickly, Namor and Valkyrie launch their own attack but are just as quickly swept aside by a backhand from Black. With all the Defenders fallen, Black advances on Strange, preparing to destroy his long time nemesis. The evil mage blasts Strange with a green fire as the Sorcerer Supreme struggles to call on his magics to protect himself...but, he finds that his powers will not come. It is only when Namor realizes that his own powers have not been weakened (when in fact they should have since he has not been submerged in water in a long while), that he gains understanding...Black has invented this reality and in fact, this reality does not exist. He challenges Black: Namor reminds Cyrus that he does not actually exist here, that he is but a dream creation. Cyrus Black denies this truth but the realization of this basic truth is too much for him and he fizzes out of their existence.

The Defenders are slow to recover. Valkyrie pours a decanter of water over Namor to help him revive as the Surfer helps Strange gain his feet. The Defenders discuss what transpired. They conclude that as long as Black believed in what he was doing, it WAS real which explains the reality of their physical injuries. But, once he stopped believing (as when Namor reminded him of the fact) his control of the effect was lost. Like in a dream: When you have a nightmare your heart pounds, you sweat, you writhe- in short, you suffer exactly the same effects from your fantasy as you would in reality. They had become parts of Cyrus Black's dreams.

NOTE: The last page of this comic features the first pinup poster of the dynamic Defenders. It features Valkyrie, Namor (the Sub-Mariner), the Hulk, the Silver Surfer and Doctor Strange.

NEXT: War Beneath the Waves....guest-starring Hawkeye! 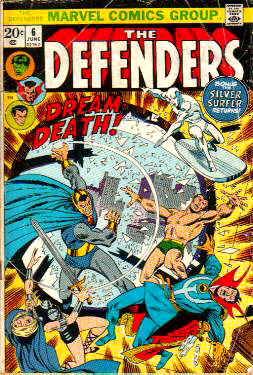