"War Beneath the Waves"

The story opens with Namor the Sub-Mariner and Valkyrie watching from the the rooftops as the Hulk battles the ex-Avenger, Hawkeye. The Hulk appears more annoyed with the purple archer than actually angry, but he levels him anyway into a pair of garbage cans. It seems that the green skinned behemoth is upset that Hawkeye has been following him across the city (ASIDE: Hawkeye has been tailing the Hulk because he is interested to know why the great-green-one was searching for Dr. Strange as he stated during a recent battle with Zzzax (see Incredible Hulk #166), a fight in which Hawkeye also participated END OF ASIDE). Hawkeye pulls himself from the garbage and, with the Hulk's back to him, sends off an arrow which ineffectively strikes the Hulk in the back. The annoyance of it all enrages the green monster who turns on Hawkeye and advances menacingly towards him "Hulk will smash stick-man!!"

As Hawkeye back peddles, Valkyrie descends to block his retreat. The ex-Avenger believes Val to be the evil Enchantress (as in fact the Valkyrie once was, see Avengers #83) but this version of the Valkyrie was created by the Enchantress (see Defenders #4). Hawkeye, of course, does not know the difference just as he is unaware that the Defenders actually exist. Hawkeye prepares to attack Val but he is easily knocked down with a swipe of Val's sword, a sword which Hawkeye finds familiar in appearance (you may recall that this sword belongs to the Black Knight who was also once an Avenger). The Incredible Hulk thinks Val beating up on Hawkeye is incredibly funny and he sits down with his back against a building to watch and laugh.

Hawkeye, meanwhile, manages to get an arrow off at Valkyrie and knocks the magical sword from her grasp. He advances on the warrior woman in anger, a score to settle in his mind. But, before he can get to her Hawkeye is punched soundly by Namor who advises the bowman to cease his endless self-promoting prattle. Hawkeye, lying amid an alley-way's garbage, thinks he has fallen into a convention of the super-bad and realizes he is way out of his league now. But, before Valkyrie advances to finish him, the Sub-Mariner intervenes and questions Hawkeye as to what his motives are.

Hawkeye explained that he left the super-team The Avengers because the Scarlet Witch (whom Hawkeye was in love with) chose the Vision over him and it was too painful to stay (see Avengers #109). He had then teamed with the Champion for awhile until he realized that the Champion had evil intentions. So, he went back to his first love, the Black Widow, but ended up squaring off with her current flame, the Daredevil. Just when things could not get any worse, they did, as the Avengers showed up and offered both the Black Widow and Daredevil membership in their super-group to replace Hawkeye (see Avengers #110 and Daredevil #99) Being down-hearted, he headed back to New York in need of some action to take his mind off things. There he met up with the Hulk who was battling Zzzax and it was here that he learned of the Hulk's search for Dr. Strange.

Val explains to Hawkeye, much to the chagrin of Namor, that the Hulk was looking for Strange because he is the leader of the Defenders. Hawkeye has no idea who the Defenders are so the Sub-Mariner explains, again stressing the non-team issues. They are NOT the Avengers, Namor warns. Unheeded, Val invites Hawkeye back to Dr. Strange's sanctum and they depart, the Hulk follows up the rear confused at all the discussion. Back at the home of Dr. Strange, the heroes discover him to be away (ASIDE: In fact, Strange is trapped in the crypts of Kaau, battling the dreaded Shumagorath for the life of the cosmos, see Marvel Premiere #9, END OF ASIDE).

Hawkeye takes in his surroundings, making comparisons to the Avengers mansion. He then asks how is it that the Valkyrie is now on the good side. Val explains her origin to him and impresses on him the importance of her Defenders. Suddenly, a loud knock at the door cuts off Val before she can go on further. Namor answers warily and discovers another Atlantean. The blue skinned servant explains that he was sent by Lord Vashti to warn Namor that they have learned that Attuma plans on attacking the surface world at Atlantic City in a few hours. The very name of Attuma causes Namor to seethe inside, as it was Attuma who kept Prince Namor from saving his lovely Lady Dorma (see Sub-Mariner #37). As Namor prepares to leave he is joined by Val, Hawkeye and the Hulk.

Meanwhile, on a beach in Atlantic City two swimmers are enjoying a swim in the cold Atlantic waters. Suddenly, the female swimmer is grabbed around the ankles by an enormous tentacle . Dragged down into the murky depths with her boyfriend following, they discover a great surging wave of men, machines and mutant marine monsters marching inexorably towards the unsuspecting Atlantic shore. The underwater army is led by Attuma who stands astride a huge metal tank. Previously, the villain was thought dead, buried beneath tons of rock and silt (see Sub-Mariner #37) but apparently, that was not the case. Moments later, the advancing army breaks the surface and gains the beach sending the sunbathers and swimmers into a scrambling panic.

Luckily, before an innocent bystander is squeezed to death by a massive crab the Defenders arrive! The Sub-Mariners swoops down from the sky, smashing the unnatural crustacean's mighty claw freeing the hapless bather. Valkyrie, riding her winged stallion, demonstrates her prowess with a sword by removing the claw off a second giant crab with one smooth stroke. Not to be outdone, Hawkeye who rides behind Val, lets off an explosive arrow from his bow and blows a crab to smithereens. The Hulk, meanwhile, is less graceful and more direct as he pounds the crustaceans into bit-size pieces with his fists. Namor notes that as each shelled beast falls, another rises to takes its place and he wonders where Attuma gained the power necessary to control such monstrous creatures. He sets out to find Attuma to discover the answer.

The Sub-Mariner pounds and throws aside advancing men like they were dolls. Diving into the ocean he searches the depths for Attuma. He is met by the many tentacled beast which earlier captured the unsuspecting female swimmer. In a flurry of fists powered by rage brought on by the hatred Namor feels for the man in part responsible for his beloved's death, Namor pounds the tentacled behemoth into submission. But suddenly, two porpoises attack him unsuspectingly, rendering him momentarily dazed. Attuma quickly shackles the Sub-Mariner with a yoke which saps his infernal strength. The blue-skinned Attuma then commands his army to the surface where he presents his prisoner to the remaining Defenders demanding they cease fighting or witness their comrades immediate slaughter. While both the Hulk and Valkyrie hesitate, wondering what to do, it is Hawkeye who utters their surrender. It is the ex-Avenger Hawkeye who understands the meaning of teammate.

Meanwhile, it becomes apparent that Attuma came to Atlantic City with more purpose than simple conquest as three members of his army announce they have captured "the man and his babbling woman" of which he sought. The couple is forced to board Attuma's underwater craft as are Hawkeye and Valkyrie. However, the Hulk recognizes the water ship and blue skinned men from an earlier encounter (see Incredible Hulk #164-165) and he leaps out of sight in a single bound! Attuma and his team do not pursue. On board the ship in a prisoners hold, the Defenders find they cannot remove Namor's shackles without killing him first, so they wait out the journey to regain their strength as the ship heads for a destination unknown.

Untold time passes before the cargo door is opened and the captives are ushered from their prison. They have arrived in Attuma's new domain, a spectacle seemingly torn from an architect's nightmare! The Defenders are lead to Main Hall where they are unceremoniously presented to Attuma. Namor is infuriated at Attuma's use of porpoises to aid his attack and asks where he learned to master these animals. It is then that the Defenders learn that Attuma has an ally, an expert who is skilled at controlling nature's lesser beasts...The Red Ghost (last seen in Iron Man #16). The Red Ghost explains that never again will he use apes for his deeds as they are unpredictable. He plans on using the knowledge of Dr. Jennings, the world's foremost marine biologist (we saw him captured with his wife in Atlantic City hours earlier) and his own cosmic rays to create an army of swift and deadly porpoises to conquer Namor's Atlantis, and then the world! Namor seethes with fury and threatens the Red Ghost but the would-be conqueror just laughs at the Sub-Mariner and hints that he has more interesting things in store for his prisoner...

Hours later, Val and Hawkeye find themselves separated , across from each other's cell. They secretly plot their escape. As a guard approaches carrying food, Val distracts the jailer with seductive talk. Hawkeye reaches from behind and chokes the big guard and then Val smashes his face with a mighty punch. Hawkeye, deftly removes the keys from the unconscious guard and the pair make good their escape. They set out in search of the Sub-Mariner but first, Hawkeye makes a bow and several arrows from a bed slat and banister posts found in the cell. The duo sneak down several corridors before coming across a laboratory where several guards watch over Dr. Jennings work on the porpoises. Hawkeye and Valkyrie launch their attack and quickly dispose of the guards. Val gathers the doctor and is about to continue the search for the Sub-Mariner when suddenly the Red Ghost appears. The mad genius explains that there is no need to search for Namor for he is already here. From the shadows steps the Sub-Mariner, his face twisted with rage and madness. Only then do Val and Hawkeye understand that Namor has become a mindless slave to the Red Ghost. The once proud monarch of Atlantis is then commanded by the Red Ghost to destroy his former friends!

NEXT: ...If Atlantis Should Fall! (The Defenders go monthly!) 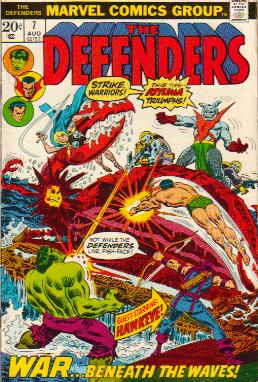